It’s been a few days and I’ve heard some rumblings that people are missing me and my posts.  I’m really sorry for the delay, but I have been really really busy getting all settled back at home! It’s 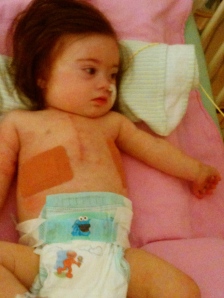 true – on Saturday morning the awesome nurse practitioner, Erica, woke me up early and sent me downstairs for one last chest x-ray.  After the surgeon had a chance to look at it, they decided that my effusion looked small enough (finally) that my body could probably just absorb the remaining fluid because it obviously wasn’t coming out of my drains anymore (there was just a teeny tiny bit coming out of both tubes).   The mom’s were a bit nervous because they weren’t really expecting it to happen so suddenly.  It turns out that the information they had gotten before was a little mixed up: instead of starting on steroids right away, the doctors decided to see how I reacted to having food in my tummy – to see if the fluid would stay down or would start collecting again – before trying the steroids.  In the end, they were really happy with me and that meant letting me go home.

I obviously had to get my chest tubes taken out first, but after all I had been through, I handled it like a total and complete champ.  They gave me a little morphine and my little pink bunny and went to work.  The only time I even cried a little was when a little skin was stuck to one of the stitches holding the tubes in place, but as soon as that was figured out, I stopped crying and out the tubes came in just under a minute.  It was the best feeling in the whole entire world! Mama C looked so so happy the whole time (and the nurses were very impressed that she even stayed in the room).  Mommy had decided to go for a walk and get the rest of my bravery beads (I have a lot of them now) but when she came back, they both got me dressed in my pretty white dress and purple headband from Natalie (because everyone needs to look they’re best when they’re making an exit) and we only had to wait 20 more minutes before I said goodbye to Erica and Vari and we walked out the door (but not before the mom’s got one last starbucks).

The mom’s were a little worried that it would take me a while to get settled at home again but they really should have known that I’m the most impressive little girl and so far it’s been okay.  I had a bad night sleep on Sunday night; I was awake from 2am until 6:30am and just wanted to hang out with Mama C, but last night I was back to sleeping through the night.  I’ve had 2 bath’s with my all fixed heart and I like it so much better than before.  Before my heart was all fixed, I got cold very easily but now it’s easier for me and as long as I stay wet I don’t cry at all.  My hair got longer while I was in the hospital (I think it’s because I was sleeping so much and growing while I slept) and now Mama C can put it into pigtails….I don’t know how I feel about that yet, but I’ll let her play for now and get her fix in before I’m older and can tell her to stop.

I’m still a little bit weak from all of the lying around that I did for 23 days (the mom’s say that’s a long time) and so I’m having some trouble holding my head up and my arms are weak too, but the mom’s are working with me to try and build up my muscles again.  I’m also not eating as much as before because 8 days with no food means that my tummy shrank and shrank and they need to build it back up slowly.  So, right now I’m eating 75mL every 3 hours (which makes it feel like I’m ea

ting all day long) but hopefully soon I’ll be able to go back up.  I haven’t even puked yet since I came home and I think that’s a really good sign.  Before we left the hospital, a new OT came and met with the Mom’s and taught them how to start giving me food in my mouth.  We’ve started small – I tried a bottle but I didn’t really understand what to do with it and it made me choke a lot, so the OT said that it was okay if I didn’t get the bottle and we started working with some apple sauce or rice cereal and lots of different ways for me to get it in my mouth.  The mom’s sometimes put some on their fingers or my thumb and I suck on them (it’s messy and fun), and sometimes they use a spoon and kiss my lips and the insides of my cheeks so that I get used to the feeling of food being in my mouth.  They know that it makes me very nervous and I gag a lot, so they’re not putting any pressure on me and as soon as I start to get upset, they stop and we try again when I’m ready.  The mom’s also understand that it’s probably going to take me a long time to learn how to eat food AND to get enough food in my tummy to give me all of the nutrients that I need to grow big and strong, so I will still need a G-tube for at least a little while until I master this eating thing.  I’ll see the G-tube people in about a month and then it will take another 2ish months before I can have that surgery, but I’m not really in a big rush to go back to Sick Kids for an overnight stay.  Until then, after seeing the hearts that the nurses made at the hospital, Mommy had decided to start making different shapes for my face tape – so far I’ve had a hippo, a butterfly and the Batman signal.  From what I hear, there’s already an elephant, a crocodile and something called a Harry Potter symbol still to try out.

So, in the end I’m home now and it’s summer and we have some big big plans! The mom’s keep talking about places like: Ontario Place, Centre Island, Marineland, Riverdale Farm, the beach and the wading pools, so I’m excited to figure out exactly what all of those words mean.  I think we’re going to have a lot of fun!

One thought on “Missed Me, Missed Me, Now You Have to Kiss Me…”